This Saturday sees the last Teenage Market of the year on Victoria Square, and Bolton FM will be there supporting the event. 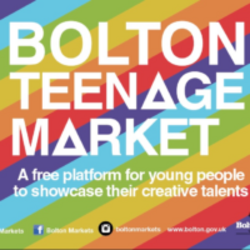 The Teenage Market welcomes young people aged 13-25 from across the Borough who will be showcasing their talents and entrepreneurial spirit. The Teenage Market includes live performances from local musical talent. Why not come along and see what they have to offer?
Bolton’s own Danny Jones and bandmates Dougie, Tom and Harry have announced McFly’s first live show in three years, playing a venue that they've never headlined - The O2 Arena in London.

In the run-up to their live comeback in November, the band will roll-out McFly: The Lost Songs, a collection of tracks originally intended to be an unreleased sixth studio album. The first song Red was released earlier this week.

Recorded in Wales and Texas in 2011, the unreleased material remains untouched since they were originally finished. The album release was shelved when the boys merged with James and Matt from Busted to form McBusted.

The seven-time chart-toppers will play the iconic O2 Arena in London on November 20, 2019, with tickets going on sale this Friday (September 13).

We’ll be looking to add Red and other releases from McFly: The Lost Songs to Bolton FM’s playlist so tune your radio to 96.5FM, find us on your smart phone or smart speaker our use or website to hear them.

You can also visit our website boltonfm.com to see where we’ll be over the next couple of months, and maybe invite us to your event by calling 01204 375408.