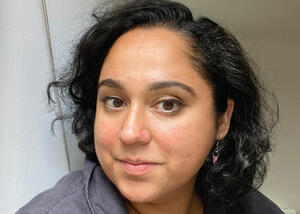 I started presenting at Bolton FM in 2009, with the Workplace of the Day slot. Then, I swiftly moved on to present prime time shows such as Breakfast and Drivetime. It was in the same year that during a Bolton FM presenter’s night out with the legendary Darryl Morris, that I was introduced to my now husband Phil! The introduction was made by Bolton FM’s very own love guru Thomas Campbell - presenter of Cuddle on the Couch!

I have presented various shows throughout the years including Tina Gandhi Meets (interviewing celebrities such as Terry Waite, Gloria Hunnniford, Tony ‘Zico’ Kelly), The Review Show and The Flat Cap Show (bringing in sponsorship from local companies such as The Last Drop and Bank Top Brewery.

Being Bolton born and bred I have a natural affinity to Bolton FM and served as a director at the station from 2014 to 2017.

Currently I am the station’s official Theatre Critic and can be regularly heard reviewing plays from The Octagon and The Lowry.